skip to main | skip to sidebar

Previously, on the Clickademics blog, I wrote about my favorite tip for studying before exams. It involves the student eating Orange Tic Tacs while studying and then again during the exam. That way the smell of the candy will remind the student of the time studying and increase recall. 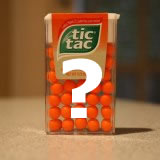 I do believe that the sense of smell is linked with memory. After posting my original article, I even had another former student comment that one of his professors cited a study that proved a similar point. However, if Orange Tic Tacs do, in fact, increase student test grades, I think it has more to do with the fact that the student believes it will work.

If I tell a student that strategically eating Orange Tic Tacs will lead to higher test grades, two other variable are at play.

Positive attitude matters. Ask any doctor or nurse; patients that believe they can get better do get better. The mind has tremendous effect on the body. I remember when I was coaching my son’s basketball team, one of his friends was nervous because he was going to be playing against us on Saturday. I told him that if he spent ten minutes Friday night picturing himself shooting baskets, he would score more baskets in the game. Sure enough, he played great, and he later told me that he scored more than he had in any other game. If his positive outlook can improve his free-throws, doesn’t it make even more sense that my student’s positive feelings about studying would improve her recall?

My point is that students are more likely to believe that they can succeed when their teachers believe they can succeed. So whether a student does well on a test because of a candy or because she believes she can, it is vital that teachers encourage their students. Don't want a room full of candy? Lucky pencils, encouraging notes, and pre-test pep-talks also work wonders.

I have been a middle school English teacher since 1994, though I did take a break for a couple of years to start my Clickademics website. I have always been excited about education technology, and I started flipping my English class in 2014.

I have a BA in English from Vanderbilt University and a masters in education technology from Grand Canyon University.

When I am not working on being a better teacher, I enjoy reading, mountain biking, and playing with my wife and two boys.